DISCLAIMER: This is blog post is not financial advice and please always DYOR. That being said there are just so many developments on this project it’s hard to keep track

Crypto moves fast. Making money means keeping up and this is a hard job in todays landscape. Since I'm extremely bullish on what the 0.exchange project is doing and I keep going over all of these points with new people to zero I thought I should just step back and put all of this down for you plebs to consume. A lot of newcomers in this space are constantly told "DYOR" but the reality is that it's hard when the info is scattered around the interweb inside discord, telegram, twitter, or other types of social media.

Let's talk about all the changes that have been happening inside the 0.exchange ecosystem and how they are going to benefit you as a 0.hodler.

There are currently three tiers of 0.hodlers: Nebula, Red Giant, and Supernova. 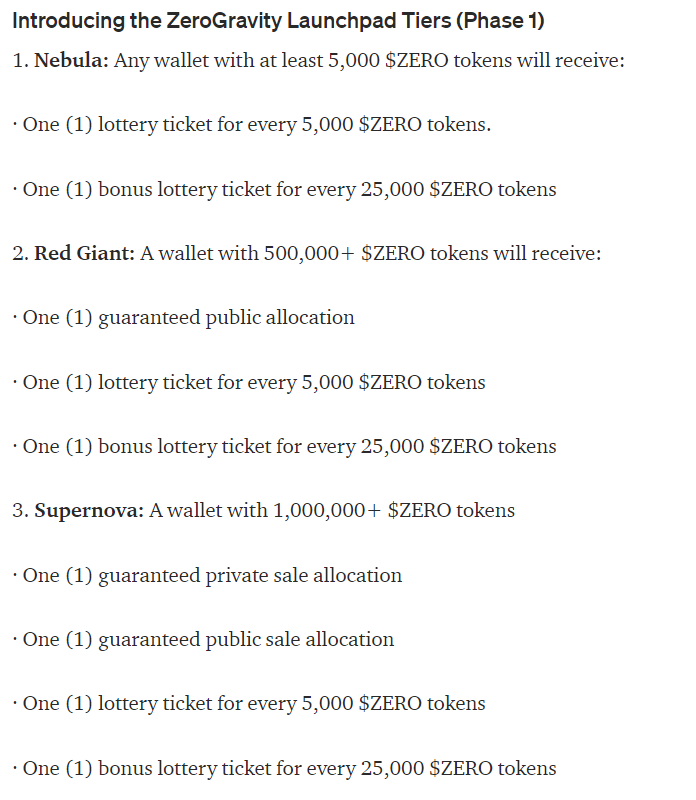 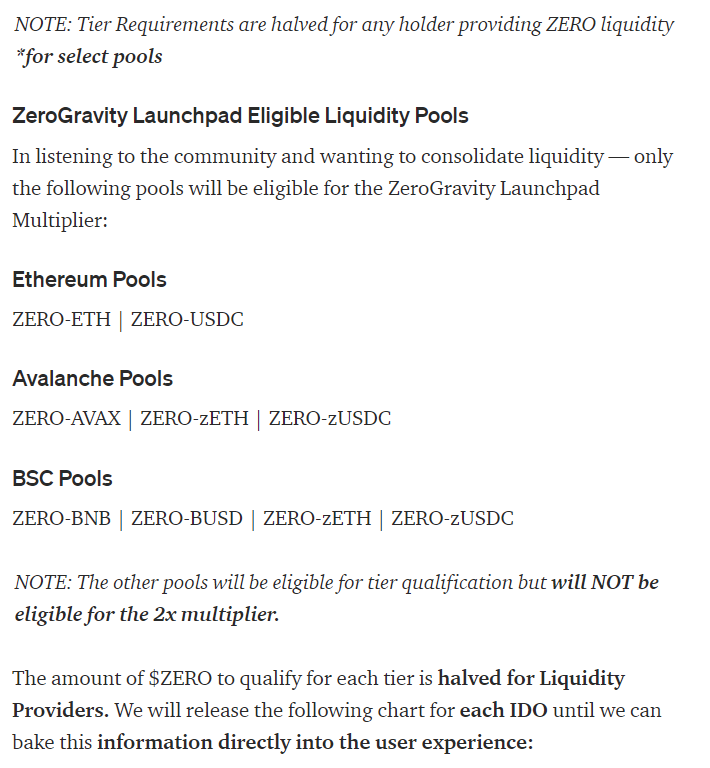 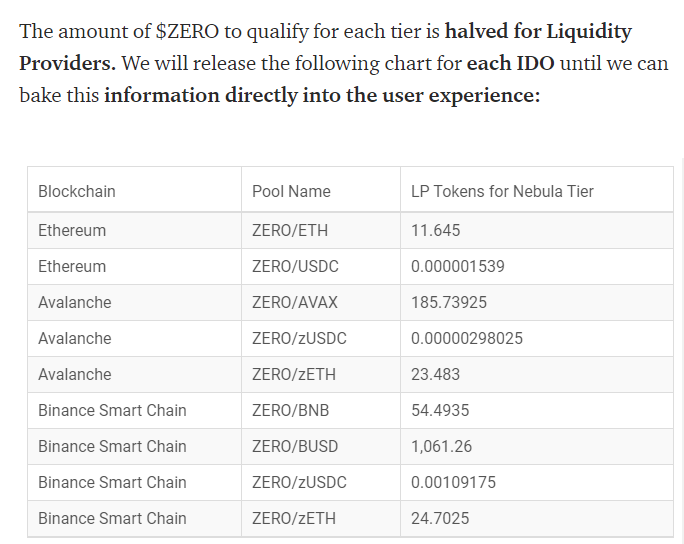 How the IDO process flows is also something else that keeps getting asked so I figured we should go over that as well. First of all you need to acquire your zero and either hodl it or enter it into the LP pool that qualities you for the IDO you want to participate in. Once you do this you must leave this wallet alone for the duration of the snapshots. One thing you could consider doing to help your workflow here is to add a second account to your MetaMask wallet under your same seed and use the second account for your Zero Gravity stuff and keep the first account soley for your daily swapping and trading. If you do this don't forget you will need to add the additional tokens into your second account and you will also need to feed that second account with some of the base currency of the chain you are doing that on (ETH,BSC,AVAX). For example if you chose to deploy the fork strategy on the smart chain blockchain you would need to create your second account, give it a name, then send some bnb there (0.05 or so) this should be enough depending on what you intend to do. Then send the zero you want and keep the rest of your stack inside your main first account account. Now, if you are using multiple devices with the same seed just remember that the additional accounts don't show up by default but are created in the same order on each device. So for example if on your desktop you created five accounts and named them, then you restored that seed on your phone you will start only seeing account one on the phone but as you add accounts they will match up with the accounts in the order they were created on the desktop. Just for clarity I suggest giving them both the same names on each device so you can easily keep track of things.

0.exchange is making it incredibly easy for 0.hodlers to benefit from just hodling their coin. If you choose to not KYC for any IDO's then after the IDO is completed any wallet addresses that had a winning lottery ticket will be able to claim their IDO returns directly from the site. This method has already proven invaluable to 0.hodlers during the first IDO that 0.exchange was involved in as a partner.

During the WSB IDO something crazy happened... 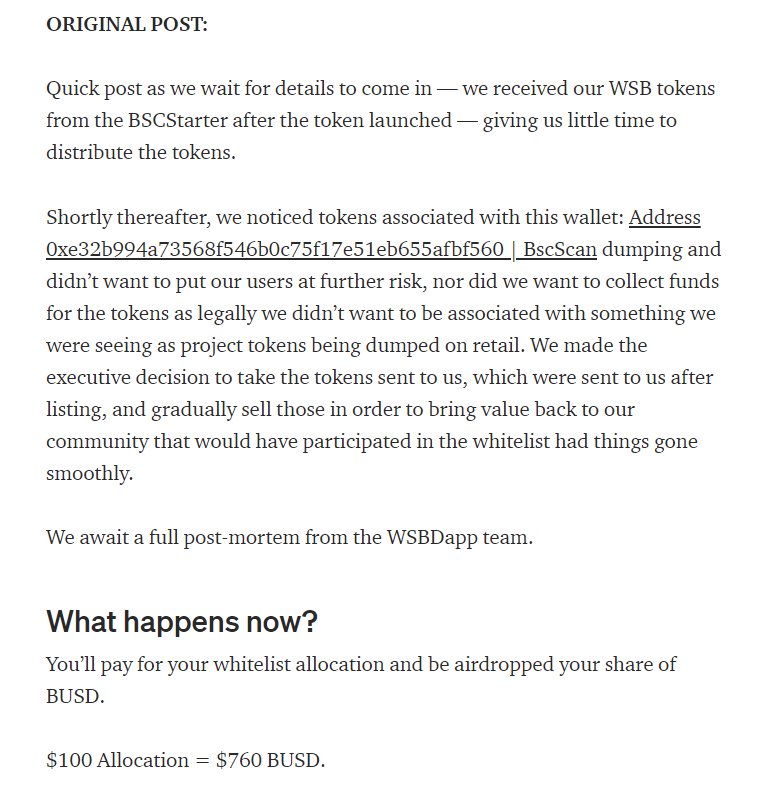 "We made the executive decision to take the tokens sent to us, which were sent to us after listing, and gradually sell those in order to bring value back to our community that would have participated in the whitelist had things gone smoothly."

In summary the new offering by 0.exchange was born. 0.hassle the new service offering launching with the wasder IDO for people that aren't eligible to KYC. Once all the dust settled all the people that won a $100 WSB IDO allocation received the ability to claim $630 BUSD from the 0.exchange site using the wallet that won the lottery ticket. Pretty nice bonus for just holding Zero. Now that this proof of concept is completed this process will be going live for all WASDER IDO participants, and from what I hear all future 0.exchange IDO's.

This article has been composed based on the following links below

Why I’m bullish on ZERO (0.exchange)

DISCLAIMER: This is blog post was send to us by community member $G MONEY$ it is not financial advice and please DYOR. That being said there are just so many development on this project it’s hard to keep track of it all so this post came about

Is there any other DEX, Launchpad, or NFT project that offers all of that utility on one token? I don’t think so. This price action and the reasons for it are blips on the radar. You’re going to look at the charts in 6 months in linear scale and it’s going to look like price action for ants. Just freaking accumulate, farm and hodl. Let the devs build and we’ll all be rewarded in the end.